This post is going to be about creating an authentication with JSON Web Tokens for your project, presumably an API that's going to be used by Angular, Vue.js or similar frontend frameworks. We're going to send the jwt with every request, meaning that we don't rely on sessions, but simply put the token on every request we make to the API. This way you don't have to worry about cookies, but you can save it in localStorage or other places on the frontend.

In essence this tutorial will go through:

If you're curious about the final result and don't want the step by step guide, check out the final jwt express gist.

Updated 10th of August 2017, thanks to the feedback from micaksica!

First of all we need to set up our express project, so we go ahead and create a directory and an index.js file.

Next, we're going to install the dependencies for an express based API and the passport.js strategies for JSON web tokens.

First, let's create a simple page with express with the index.js file:

You can node start the express server with node index.js, but for development I recommend nodemon, installed by npm -g install nodemon to make sure that your server restarts when ever you change the file.

The result you should see in your browser now should be similar to the image below:

In order to get the next iteration of our code working, we'll need to add a couple of more packages to our index.js file:

_ or lodash will just be for a small utility function, everything passport related will be used in functions for user login and token validation.

Next up is our fake users array, usually you'd get your users from the database, but we'll just use a plain JavaScript array:

Security notice: Don't ever save passwords in plain text. Every time you do outside of a learning environment, an ancient god decapitates an alpaca!

passport.js works with the concept of strategies. They basically are a middleware function that a requests runs through before getting to the actual route. If your defined authentication strategy fails, which means that the callback will be called with an error that is not null or false as the second argument, the route will not be called, but a 401 Unauthorized response will be sent.

Here the strategy we're going to use for the web token authentication:

Note: The API for the jwt package has changed and now should be:

Our strategy is configured to read the JWT from the Authorization http headers of each request. Instead of ExtractJwt.fromAuthHeader() you can define an number of other extraction methods or even write your own. See the passport-jwt repository for the full list.

The secretOrKey is the secret that our tokens will be signed with. Choose this wisely or use a private key.

Inside our strategy we console.log the received payload for debugging purposes, try to find a user with a matching id field in our array and return either no error and the user object or false if the user was not found.

Let's continue to update our express app with the body parser and the login route:

This part almost stays the same, we need to initialize passport with express and enable the bodyParser (urlencoded for usual forms and json for requests with type: application/json, common for APIs).

The login route checks if both name and password have been posted, if so, we look for the corresponding user in our fake users array.

If no user has been found, we signal that to the user in question.

Now if a user has been found and the password is correct, we set the payload for the JWT to {id: user.id} we use the jsonwebtoken package to create the token and respond with it.

Note: Put simple identifiers in your token, no sensitive data like passwords.

We can now test if our login functionality works as expected with Postman. Set the HTTP method to POST and the URL to http://localhost:3000. The type is x-www-form-urlencoded (you can also post RAW json if you want to).

Here we see a wrong password response for our login attempt: 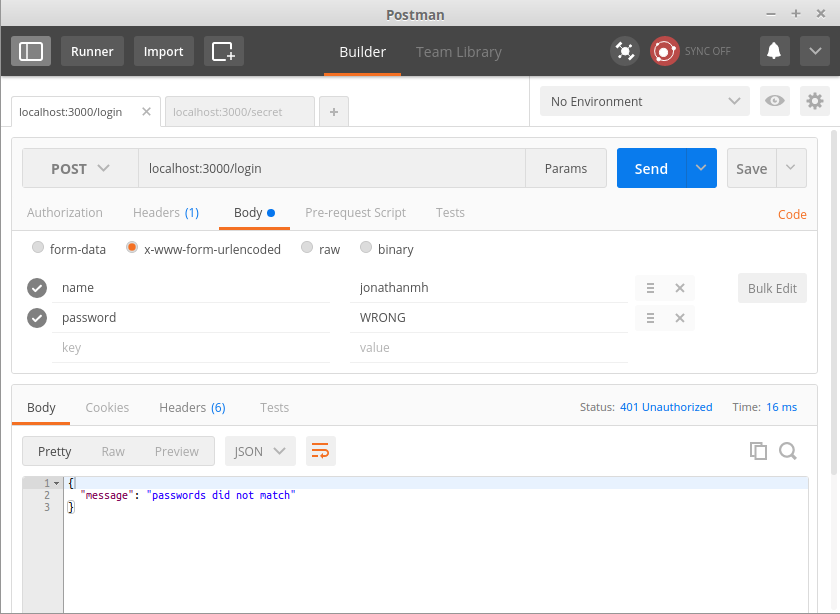 A correct username and password combination should yield the following result: 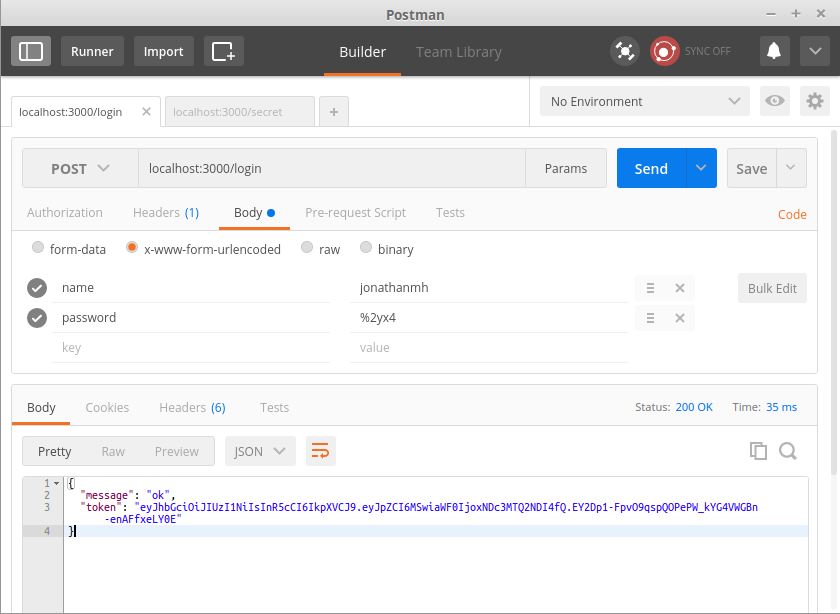 So far, so good. We have created a login function that works and we get a token. Now we need to use that token to be able to access some kind of secret information.

We see our /secret route and that we have a second function defined before we finally pass req and res on. The passport.authenticate part means that we pass the request through our previously defined authentication strategy and run it. If it's successful, we respond with the secret message, else the request will be unauthorized (401).

To test if this works, first log in and copy the token, then open a new Postman tab and change the settings to:

Note: It's important the Auth header starts with JWT and a whitespace followed by the token, else passport-jwt will not extract it. 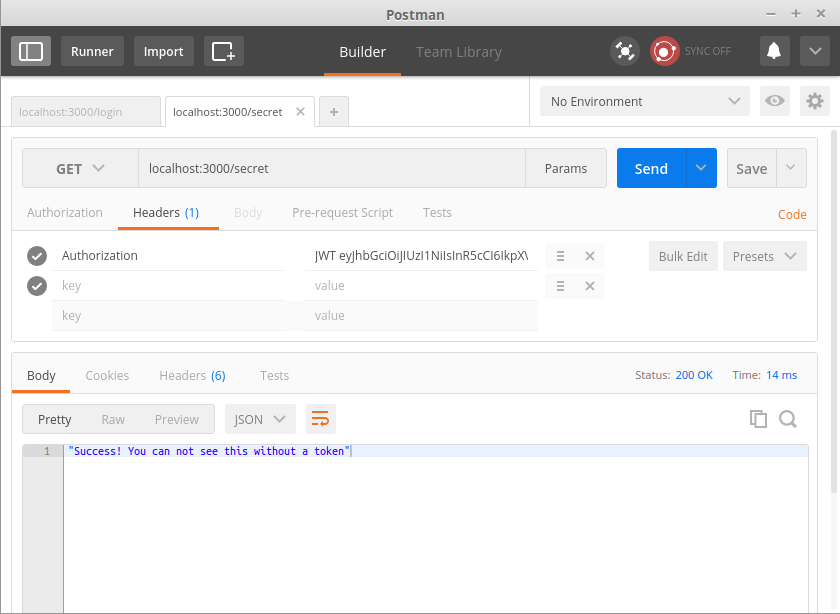 Express and Debugging Passport or Middleware

In the process I of course forgot to prepend JWT so I created a temporary route for debugging my request that would console.log the received headers:

See the full files on github:

In the next post we'll have a look at how we can use the issued web token with JavaScript inside the browser and have protected API access.

If you liked this post, feel free to subscribe on feedly, follow on twitter or check out some of my other posts. If you think I could have explained or done something better or more beginner friendly, please let me know in the comments!

Most importantly: Don't put secret stuff into a JWT, unless you've read the following post and know what you're doing.If you want to build anything half-way secure, you should use a token store that associates a generated string with a user-id backed by redis, in memory or your database like MongoDB or SQL. These rows or documents will basically store a session equivalent with the following fields:

Don't put your stuff into production without this ;)