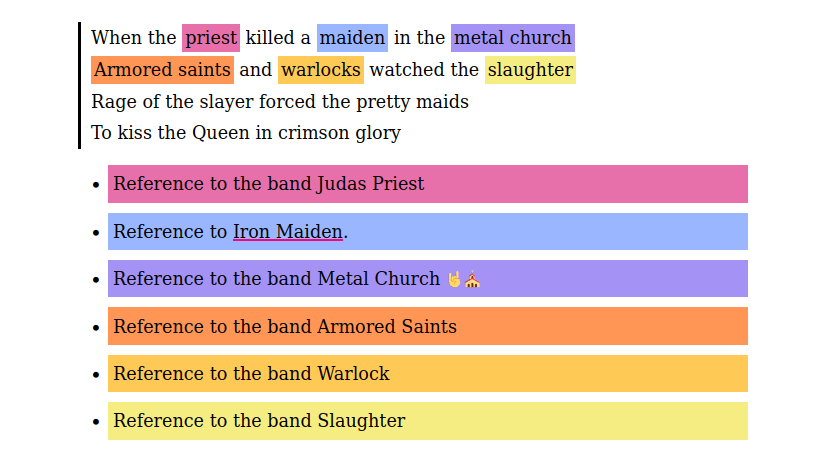 In this post we're going to have a look at how to build a component to annotate text. This is probably useful for linguistic analysis, I primarily built it for song lyrics and to do some communication breakdown of some messages I get that are wrong on so many levels, that I need visual aid to break them down.

One of the examples I thought of when building this in my head was genius.com, they have a community of people doing interpretations of lines in songs, which is a bit different than having to know every reference, but you can submit an interpretation or something you know of a specific passage, which is interesting. 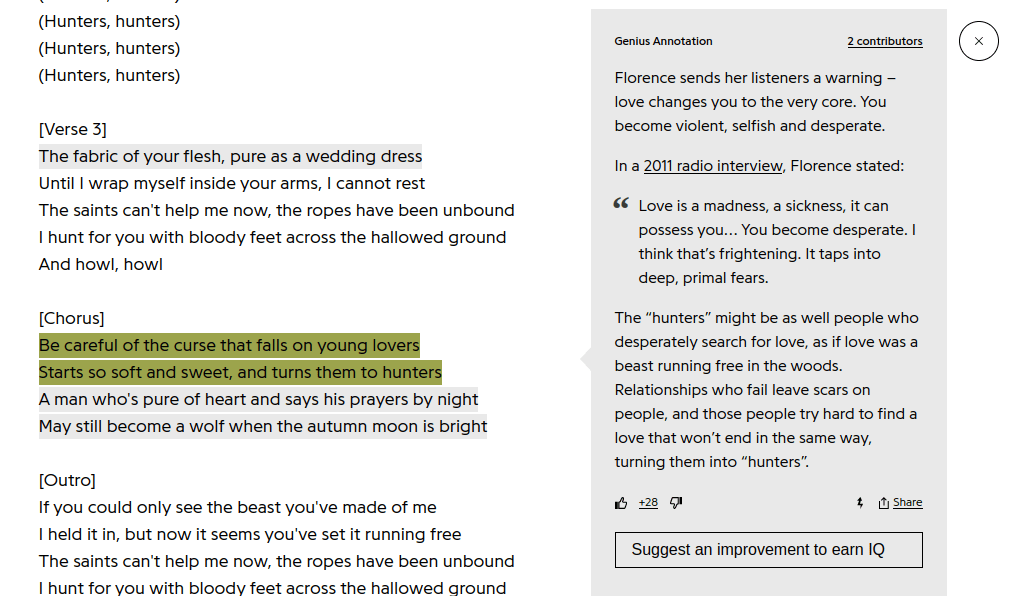 This is turning out to be a bit like annotated text in a school book for learning languages, but that's not too bad. School books aim to clarify and visualise knowledge for 100% of the seeing population, so I guess I can't get a more versatile role model than that.

The search for a colour palette went down a bit of a rabbit hole, so I'll just explain my colour choices here instead of later:

These are the colours I use and they are slightly brightened colours from the colour blindness friendly palettes collected here: davidmathlogic.com/colorblind/ which are super great. Also I'm using the hsl(a) colour space to be able to darken, brighten, play with the opacity.

I needed a react component, since I'm going to use this in the context of next.js and displaying it in MDX posts for this blog, so I wanted to go for something that is fairly vanilla HTML in the elements that are passed. We're going to use the fantastic metal history song Metal Crüe (2006) by Sabaton.

The passage we want to break down a little is the chorus:

Alright we have lots of metal bands we need to reference.

We're using the <mark> tag here, which is an HTML tag meant for highlighting

So both the prop notes and the children of the component are react nodes aka HTML elements. Technically these are not the same, but for all we care they are when writing content.

Now we just need to write a component that receives the props and children to do our bidding and satisfy our highlighting needs:

The important bit about this file is only this bit:

You could also just pass strings to the notes prop, however I wanted hyperlinks to work and other HTML elements like images. Even better for my workflow would possibly be to pass markdown strings, but that would escape the scope of this for now.

Here we assign the same data-note-index to the notes list that we already use in our content. Then we move on to styling:

We're targeting [data-note-index="0"] and assign the colour for either the mark background colour or the list item background. You can also use borders or whatever you want to style, as long as you target the same index, you can give them the same colour.

This will result in a simple component:

Now for a more advanced example where the amount of notes exceeds the amount of colours we have available, we have 6 references, but only 5 colours plus a fallback assigned:

So every reference AFTER the first 5 will get a pale yellow colour, like the last one in this example. If I ever run into this case where I can not break up the source text enough, I could also number them with some old school footnote annotations like [1].

In case my styling changed since this blog post was published, here's a screenshot of what was supposed to be there 😛:

As you can see, I'm not amazing at picking examples because obviously the song references only bands, but you can totally pass longer texts without completely wrecking the layout.

Next steps for me would be to find a good way of highlighting the relevant annotation or maybe even displaying as a tooltip, which would improve the user experience.

What are you building that requires text annotation? Let me know!