Creating a Chatbot for Slack with Node.js in 17 lines

Creating a chatbot for Slack, the easy to setup group chat for teams was surprisingly easy. In this post we're going to go over creating a chat bot that can reply to queries and take an action on simple keywords.

We're going to use a node module called BotKit, which will enable us to connect to Slack easily. Actually Botkit offers a GUI (paid plans) and also connects to Microsoft Teams, Spark, Twilio and even Facebook.

One of the things I like the most about it is that you can kind of build a bot once and then re-use components across different platforms, which is super cool.

but will probably be up and downwards compatible fairly far since the dependency has been around for a while.

Setting up the Dependencies and the API Token

The only dependency we really need is botkit and an API token from Slack. Go ahead and create your project directory and inside it install botkit as a dependency:

To get the slack API token, you need to be signed up with Slack and visit the Bot user page where you can view your API token. Copy this one or write it down, we're going to need it to create our bot! 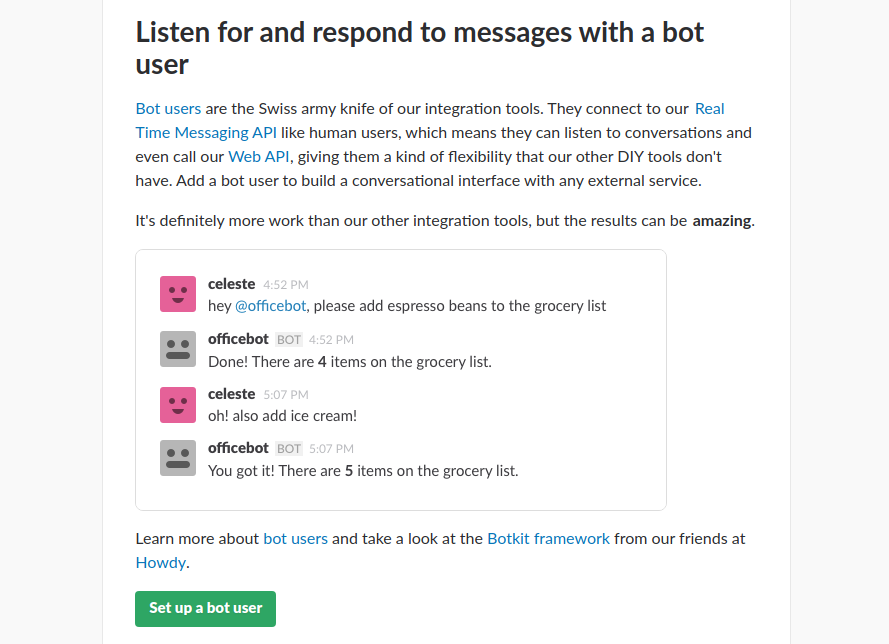 You'll need to fill out a username for your bot 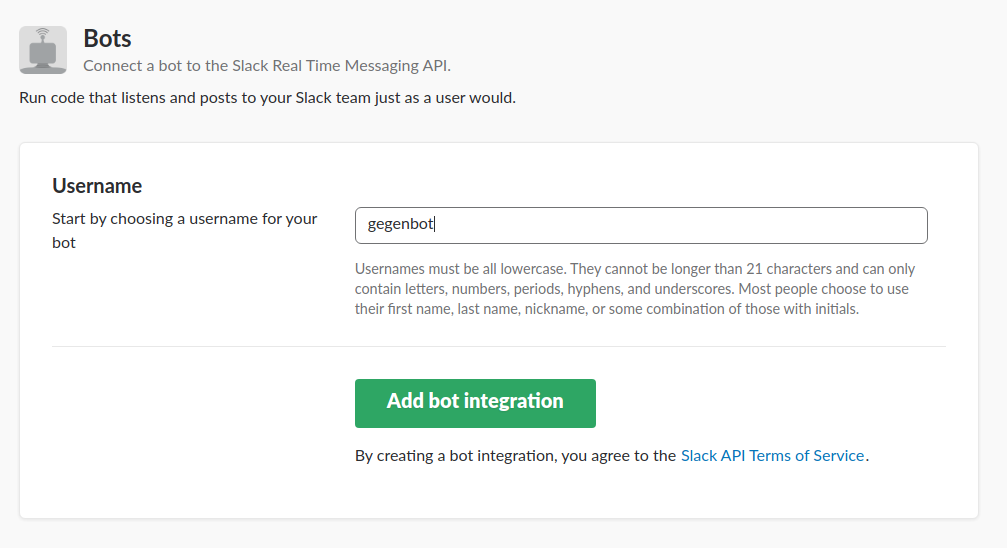 and will provided an API token. 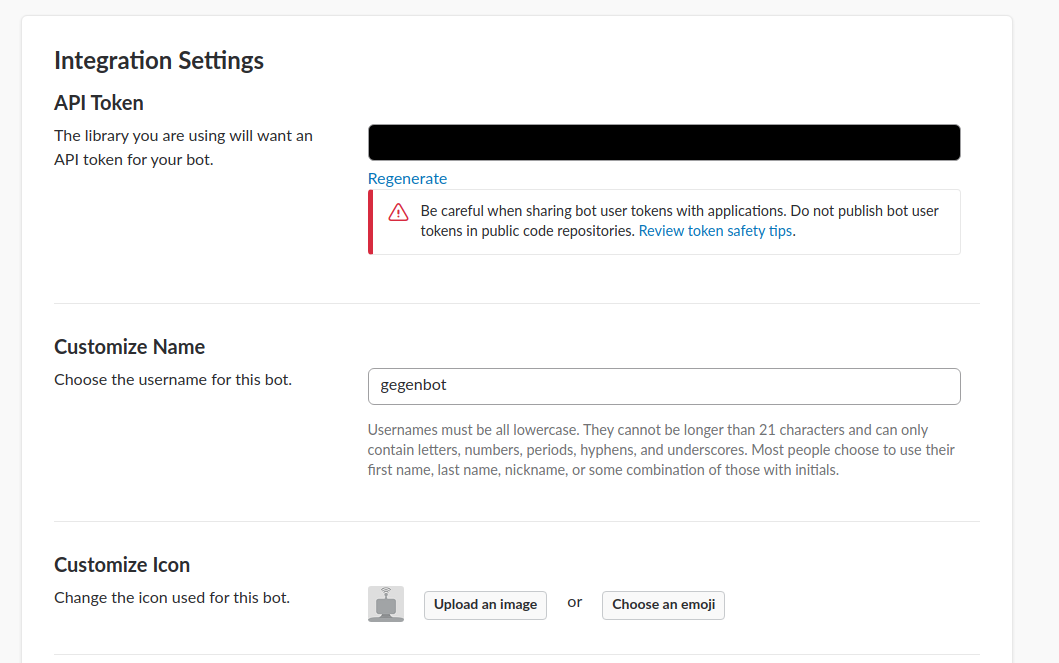 Also you can either set a custom image or an emoji for your chatbot.

The botkit repository has some examples for bots for slack, but let's start even shorter than that.

Now let's run node step-1.js which should produce the following output if it worked:

If something is wrong with your API key, it will give you an error message like so:

Let's go back to the code for second.

The controller code will determine the behaviour of our chatbot. Basically the function hears() has three arguments:

The location or context means: Where did the bot hear this?. Were they mentioned or did they just hear somebody say one of words in a channel?

Let's open our Slack app and see if our bot has arrived well!

Interacting with your Chatbot

If your chatbot has successfully made it to Slack, you should see it online in the sidebar under Apps:

For development purposes I recommend you create a bots channel, so you don't spam your co-worker with half baked code that basically doesn't work yet. Obviously such mishaps would never happen to me and it's purely a precaution ;)

Invite your bot to any channel with the /invite command in Slack. In my case I had to write: /invite @gegenbot, but if you start the username with an @, slack will offer you some autocompletion magic.

Did you see I didn't directly match any of the words we had specified in our trigger array? That's because it automatically checks the lowercase version and responds anyways, even if I type Hello? instead of hello. If you want to match explicit cases, you should use a regex.

Where to go from here?

There are few limits. First off, get your API key out of your application code and put it in an environment variable like the official example tells you to.

Next off, write an amazing bot that calls co-workers out for swearing or asks people to be specific when they just end a sentence with "it." or "this." like:

and the bot would go:

What is "this"?! Be specific please!

(Yes, I have seen people get red in anger over this, so maybe not a good idea.)

Or do a bot that's hooked up to your hacked coffee machine and remotely start brewing coffee from Slack! Hook it up to a ton of APIs, your imagination is the limit!

Just let me know in the comments or hit me up on twitter!